I love Asian cuisine – both the food and the cooking! Today I’ll show you a takeout classic named after a Chinese general: General Tso’s chicken.

Originally, the breaded pieces of meat are deep fried in oil. But since I’m not a fan of hot oil, I’ve developed a baked version that is also tasty.

I prepare the rice as a side dish in this recipe according to the swelling method. That is, clean the rice properly until the water is quite clear and then put in a pot per cup of rice one and a half cups of water. Bring to a boil, cover, reduce heat and wait until all the liquid has been absorbed by the rice (about 20 minutes).

The complete recipe for General Tsos Chicken can be found directly below. Have fun cooking it! 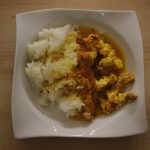