This weekend I leave the beautiful Swabia and move abroad – to Bavaria! On this occasion I would like to share an absolute classic of Swabian cuisine with you: The Maultasche.

The dumplings filled with minced meat and spinach were originally invented by monks in monasteries. The story goes that during Lent, they wrapped the forbidden meat in dough to avoid God’s gaze. This is where the name “Herrgottsbscheißerle” (Fooling God), which is widespread in Swabian, comes from.

Every Swabian housewife probably guards her own secret recipe for “original” Maultaschen, but in the basic features they are always similar. The pasta dough is only extremely rarely from own production, but mostly pre-ordered from the baker. The filling always consists of minced meat, spinach, parsley, egg and a binding agent like a soaked roll. Often veal sausage meat is added, but I do not use it in this recipe, because it is not easy to find and in my opinion it does not affect the taste.

The filling must be mixed properly in a bowl so that it can be easily spread on the pasta dough. Here’s the rule: when you think everything is sufficiently mixed, keep going a little more!

Then it’s time to fill the treats. Spread the filling evenly on the lower third of the pasta dough. Now fold it in twice from the bottom, so that a small piece of dough is left over at the end. Spread some water on it and “glue” the overhang from the top onto the pasta stick. Now take a wooden spoon and press depressions into the dough at regular intervals. At these points, the Maultaschen are then separated from each other with a knife. With this trick, the filling remains in the pockets during cooking.

In boiling salted water, the Maultaschen may now pull about 10 minutes. Here’s another tip: I like to prepare a large amount of Maultaschen and then freeze them. Just make sure that the Maultaschen don’t touch each other until they are frozen on the outside, then they can be put into a bag and taken out again individually. When prepared in the broth, the frozen pockets simply need a few minutes longer and taste a thousand times better than the packaged version, I promise! 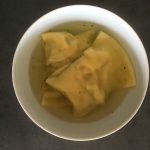